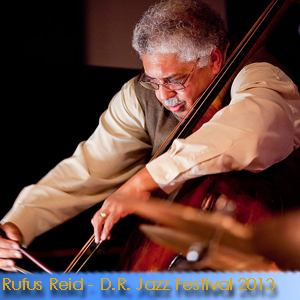 Reid was raised in Sacramento, California where he played the trumpet through junior high and high school. Upon graduation fromSacramento High School, he entered the United States Air Force as a trumpet player. During that period he began to be seriously interested in the bass. [br][br]

After fulfilling his duties in the military, Rufus had decided he wanted to pursue a career as a professional bassist. He moved toSeattle, Washington, where he began serious study with James Harnett of the Seattle Symphony. He continued his education atNorthwestern University in Evanston, Illinois, where he studied with Warren Benfield and principal bassist, Joseph Guastefeste, both of the Chicago Symphony. He graduated in 1971 with a Bachelor of Music Degree as a Performance Major on the Double Bass. [br][br]

Rufus Reid’s major professional career began in Chicago and continues since 1976 in New York City. Playing with hundreds of the world’s greatest musicians, he is famously the bassist that saxophonist Dexter Gordon chose when he returned to the states from his decade-long exile in Denmark. His colleagues include Thad Jones, Nancy Wilson, Eddie Harris and Bob Berg [br][br]