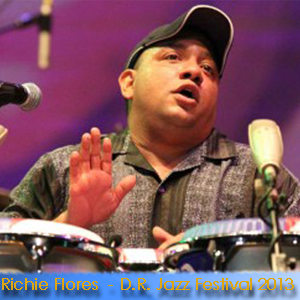 , one of the most in-demand percussionists of today’s active music scene has captured the attention of fans and critics alike by way of his electric performances that continually thrill audiences worldwide. Recently described by Latin Beat Magazine as having “the fastest hands in the East and the West,” Richie’s music is primal and powerful. [br][br]

He is currently in the process of innovating a new sound for the band of which he is leading; an exciting, contemporary fusion containing elements of rap, jazz and even salsa, further complemented by lyrics that contain a positive message of hope, a message that is relevant to the challenging issues we face in today’s ever changing world. Born in Brooklyn, New York, but raised in Trujillo Alto, Puerto Rico, Richie was a prodigious talent as a young child that began playing congas at the early age of 5. [br][br]

He embarked on his professional career by age 8 playing with Grupo Batacumbele and Roberto Roena and the Apollo Sound. By age 13, he traveled to New York to play with Roberto Roena at the Village Gate, making him one of the youngest musicians ever to travel with a band outside of Puerto Rico. [br][br]

He continued performing professionally while studying percussion at the highly regarded Escuela Libre de Musica in Hato Rey, Puerto Rico. With this successful start under his belt, Richie’s musical career continued to evolve by playing with some of the most respected and celebrated artists in the genre such as Tito Puente, Eddie Palmieri, Cachao, The Fania All Stars, Gato Barbieri, Hilton Ruiz, David Sanchez and the Tropijazz All Stars. [br][br]

He also has recorded with other notable artists such as Gato Barbieri, Hilton Ruiz, The Tropijazz All-Stars, Tochico Akiochi, Jimmy Bosch and Sergio George. Mr. Flores has had his own line of Congas with Pearl Drums since 2001 and actively tours the world teaching clinics at various educational institutions on behalf of Pearl. He has recently signed an endorsement deal with Zildjian cymbals and also uses Remo FiberSkyn 3 products