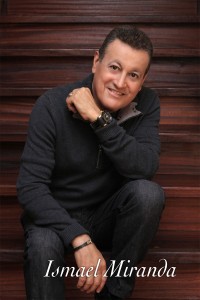 Ismael Miranda, one of the best “soneros”  that has existed, was born in Aguada, Puerto Rico, on February 20th, 1950.   When he was 4 years old he moved to New York with his family.  When he was 11, he was part of the vocal group “The 4 J’s”  and  “Little Jr. and the Class Mates”.  He participated in many activities,  as one of the first events organized by Jerry Lewis Muscular Dystrophy at Palm Gardens.
[br] Due to his interest in afro-antillian music, he formed part of the Sextet  “Pipo y su Combo” and was  part of the group “Andy Harlow and his  Sextet”, where he sang and played the conga.  In 1967, he made his first recording with Joey Pastrana, named  “Let’s Ball”.  In this, the teenager Ismael scored his first radio hit with “Rumbón Melon.”
[br] With the good impression he made with his performances with Andy Harlow and his brother Larry Harlow, they decided to recruit him for their orchestra.  Ismael Miranda began his recording era with the named “Judío Maravilloso” in the album “El Exigente”.
[br] Also with Larry Harlow, Ismael ventured  in the field of composition, sharing credits with Harlow in the songs  “La revolución”, “Guasasa”, “Arsenio”, “El malecón” y “Lamento cubano”, amongst others.
[br] When Ismael was 19, he became the youngest singer and Composer of Fania All Stars,  gaining the nickname of “The Cute Child of Salsa”.   In 1973, at the highest moment of Salsa, Ismael erupted with spectacular force in the radio, with  “This one is made.”  This album, released by the Fania label, marked the beginning of the singer with his own group, Orquesta Revelación.  With them, he assaulted the Caribbean and the Latin market all over United States and Europe.
[br] Later, his career asserted in many aspects of the music fields.  Songs as “La cama vacía”, “La copa rota”, “Borinquen tiene montuno”, “Como mi pueblo” y “Las cuarentas” obtained wide radio coverage.   Composing, he got great success with “Señor sereno”, “Abren paso”, “Así se compone un son”, “Lupe, Lupe” y “Pa’ bravo yo”, this last one was sung by the cuban son singer Justo Betancourt.

In the 80`s, he produced several records with his independent label.  In 1986 his recording “Versos de nuestra cultura” with song writer José Nogueras, was one of the biggest hits for Xmas of that year. In 1988, he announced his retirement,  but this never happened. At the beginning of the 90’s Ismael has recorded with his own record label, IM Records, and with the label RMM.  At the end of the 90’s he associated with Andy Montañez in three record productions of old boleros, and obtained massive support.
[br] In 2002, the recording of one of his concerts was recoggnized by the Fundación Nacional para la Cultura Popular, as one of the best shows of the year.  Later on,  Ismael reaped great acclaim with the launch of a compact disc, where he played Salsa versions form the classic Mexican composer Jose Alfredo Jimenez, as well as his  release of an album tribute to Nelson Ned.
[br] His last production named “Aferrado a ti”, which is his second gospel, was in the hit parade all over Spain and the Americas.
[br]