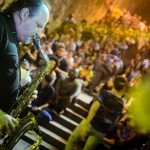 ERIC LITMAN AND  WAVELENGTH THE ORIGINAL

Eric Litman began playing saxophone at the age of 6 years, for more than 40 years he has been playing such a wide musical repertoire, that there is not enough space to mention it all. Eric has had the privilege of studying with the great saxophonist Jackie McLean, during the 1980s as a private student, to whom he gives all the credit for developing his own sound and to achieve his own style, a style strongly unique and very melodic.

Eric lived in Los Angeles from the end of the 80’s of until 92, where has started to use the name Wavelength for his band.  During his time in Los Angeles, Eric has developed mostly original compositions with the Argentine arranger Marcelo Berestovoy and the Dominican Richard Gómez.

In 1992, Eric returned to New Orleans (where he has played and studied at Tulane University), and almost immediately became among the most prominent blues and jazz saxophonists, playing with giants like Fats Domino, Johnny Adams, Willie Nelson, B.B. King, Dr. John, Rickie Lee Jones, the Marsalis family, and recording with his own 16 musicians band with the lead singer of the movie The Godfather, Al Martino, in addition to having played with many groups of Latin music, such as Los Adolescentes, Paquito Guzman, and others.

In 2000, Eric moved to the Dominican Republic where he is known for his song with the band Grupo Negros “Me Cambiaste La Vida”, opening each of their concerts with his own modern and smooth jazz music.

Currently, Eric Litman and his group Wavelegth, present a variety of genres between jazz, blues, dixieland, Latin jazz, ballads, modern and soft Jazz, which always leaves the audience fascinated with his strong and sweet sounds of tenor and alto sax.