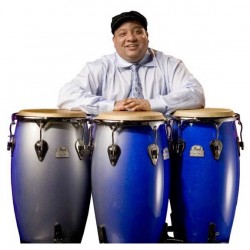 He embarked on his professional career by age 8 playing with Grupo Batacumbele and Roberto Roena and the Apollo Sound. By age 13, he traveled to New York to play with Roberto Roena at the Village Gate, making him one of the youngest musicians ever to travel with a band outside of Puerto Rico.

He continued performing professionally while studying percussion at the highly regarded Escuela Libre de Musica in Hato Rey, Puerto Rico. With this successful start under his belt, Richie’s musical career continued to evolve by playing with some of the most respected and celebrated artists in the genre such as Tito Puente, Eddie Palmieri, Cachao, The Fania All Stars, Gato Barbieri, Hilton Ruiz, David Sanchez and the Tropijazz All Stars.

He also has recorded with other notable artists such as Gato Barbieri, Hilton Ruiz, The Tropijazz All-Stars, Tochico Akiochi, Jimmy Bosch and Sergio George. Mr. Flores has had his own line of Congas with Pearl Drums since 2001 and actively tours the world teaching clinics at various educational institutions on behalf of Pearl. He has recently signed an endorsement deal with Zildjian cymbals and also uses Remo FiberSkyn 3 products