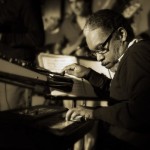 Rafaelito Mirabal was born in Santo Domingo, Dominican Republic, in 1962 and grew up and studied in Santiago. Most of his experience comes from self-taught musical practices. He has performed with nearly all the famous bands since 1985 and has visited more than twenty five countries. He has produced and composed music for over two hundred commercial jingles for radio and television. He was the keyboardist of the most famous Dominican artist, Juan Luis Guerra. From 1999 to 2006 he composed and recorded the music for the permanent exhibits of the Caribbean’s most important cultural centre “Centro Cultural Eduardo Leon Jimenez” in Santiago.

Rafaelito Mirabal has been the musical director of the festival ” Live Art ” since 1999 , which takes place every year in Santiago and has become the most genuine and authentic expression of the entire northern region of the Dominican Republic art . Furthermore, he is the music coordinator of “Expo Cibao” since 2000 (the largest Business Fair in the Dominican Republic).

Since 1987 he has directed the band “Tempered System”, which constantly participates in jazz festivals and concerts throughout the country and abroad. This group works on the combination of local and ethnic rhythms with other musical styles in the world, as well as researching it.

He was a member of the jury at the First Festival of Song Dominican in June 2007. In April 2007, he participated in a concert with his band Tempered System where the original members and the Dominican ethno cultural group “Los Guloyas ” (declared the World Heritage Site by UNESCO in 2005) Also, he made a contribution to the municipal authorities of his hometown, San Pedro de Macoris, with his composition ” Guloyazz ” (a fusion of jazz and ethnic rhythms Guloyas).

Rafaelito Mirabal is currently working on his first album and composing music for a film.