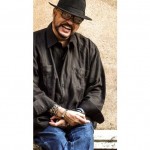 Fernando Echavarria is the creator, lead singer and director of the group Familia André. He is one of the most respected Dominican songwriters, and well-known for the trajectory of his compositions. His songs are current with contemporary Dominican music and are recognized as Afro-Caribbean and Latin American influenced. Fernando Echavarria supports the philosophy of all people having the opportunity to participate in the creative process of producing popular music, new melodies, and new musical themes with original lyrics for all to enjoy. The Familia André has presented a positive image to youth and created music that has captivated all ages and backgrounds.

Fernando Echavarria created a genre he named “fusion” with running rhythms, melodies and Afro Antillean themes such as Samba and Cumbia, and draws on such other major genres as Jazz and Rock, while maintaining the rhythm of Merengue. This concept gave the starting point for groups such as Carlos Vives, Juan Luis Guerra and 440, as well as Chichi Peralta and Son Familia, who were part of Familia André for seven years.

The music of Echavarria has had much success in the Dominican Republic and South America, especially in Colombia where his songs became icons of popular music.

Fernando Echavarria has won national and international awards such as “Revelation of the Year, Son of the Year”, “Caribbean Music Festival” in Cartagena, “Green Moon Festival” in San Andres Island and “International Tourism Fair” in Spain, among others. He was honored in 2006 with the “Luna” award from Colombia to be the most influential international artist in Colombian music in the last 20 years. He was awarded the “Honor of Merit” prize at the International Casandra awards for his career spanning over twenty-five years.