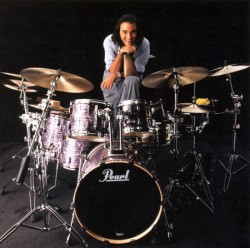 Born April 24, 1963 in Havana, Cuba, Horacio Hernandez is a renowned Cuban drummer and percussionist.
“El Negro” is a gifted musician who represents a new generation of great players following in the footsteps of countrymen Arturo Sandoval, Paquito D’Rivera, Ignacio Berroa, and others. Hernandez plays on the cutting edge of today’s music with technical prowess and versatility. His drumming also reflects a proud musical heritage rooted in folklore tradition.

“El Negro” first gained international recognition as the drummer for the extraordinary pianist Gonzalo Rubalcaba and his group Proyecto. Since leaving Cuba in 1990, Hernandez has made a name for himself in the U.S. with his live performances with many different pop, rock, jazz and Latin jazz acts and his appearances on many different albums, some of which have received Grammy awards, like Roy Hargrove‘s “Havana” (1997), Carlos Santana‘s “Supernatural” (1999), Alejandro Sanz‘ “No es lo mismo” (2003) and Eddie Palmieri‘s “Listen here” (2005). He himself owns a Grammy award for the 2001 Latin Jazz album “Live at the Blue Note”, with Michel Camilo (piano) and Charles Flores (bass).
Since 2004 he records and tours with his own band, Italuba. In 2011 he played at the Modern Drummer Festival with his new band The New World Order; the concert was released on the Modern Drummer Festival 2011 DVD also.