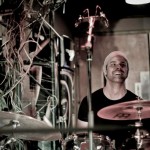 Guy Frómeta was born in 1965, in Santo Domingo, Dominican Republic. At the age of five years old, he began playing the drums. His interest in music is a family tradition, being the nephew of Billo Frómeta, the Dominican orchestra director who settled in Venezuela.  Guy studied with the teachers Joel Rosenblatt, Zach Danziger and Sam Ulano.

In 1983, Luis Dias introduced Guy to Transporte Urbano, a musical group that he remained connected with. During the same time period in the 1980s, he worked with the group OFS of Juan Francisco de Ordoñez and was also the drummer of artists such as Sonia Silvestre and Patricia Pereyra, among others. Guy spent some time living in New York, where he performed and has since returned to Santo Domingo.

Guy Frómeta developed a unique style infused by the culture of New York, influenced by an eclectic mixture of elements from rock and Latin jazz. He has collaborated with musicians such as Gonzalo Rubalcaba, Paquito de Rivera, Victor Victor, Leni Stern, Chichi Peralta, JLS and the 440 Group of Juan Luis Guerra,  among others.