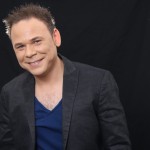 Krency Garcia was born in 1976 in the Dominican Republic. Son of the accordionist Luis Garcia, Krency began playing harmonic melodies on his father’s accordion at the age of five. At ten years of age, he won an accordionist festival. It was at this time that Professor Samuel Garcia recognized the talent and versatility of young Krency and gave him the nickname The Prodigy, and became his artistic promoter. Krency Garcia recorded his first single “No te vayas en yola” under his father’s direction at eleven years of age.

Krency went to New York at age fifteen to study musical theory and high saxophone at the Martin Luther King School. He studied singing at the Harlem School of the Arts, as well as online studies of theory and harmony at the famous Berklee College of Music. This formal musical training enabled the young talent to reach his potential as an original and authentic artist getting rid of certain limitating traditional musical codes. Krency participated in the Omega Arts Festival with the Psi Phi Fraternity Inc, representing New York, and won first place for two consecutive years.

In 1998, Krency returned to the Dominican Republic and formed “El Prodigio and La Banda Tipica” with the support of his artistic manager Aureliano Guzman. The musical innovations of Krency Garcia were not initially embraced by the genre traditionalists, but it was an achievement for the young aspiring artist to present a rhythmically diverse and progressive music to his native culture. Among his revolutionary songs are “Interplanetario, Se Aloco, Ven Dame Un Abrazo, Mi País, Traicionera, Pa’ Fuera, Jazz Ripiao como Periblues, Las Hojas Muertas, Mountain Dance and Manteca”.

The Prodigy has achieved the support of millions of fans and the recognition of such important artists as Juan Luis Guerra, Aventura, Chichí Peralta and the Cuban pianist Chucho Valdez. In 2012, Krency Garcia recorded for the second time with Juan Luis Guerra for “El Quita Pena”. He has been awarded five times with the International Casandra prize, granted annually by the Dominican Association of Art Journalist (Acroarte), performed at the Pan-American Games in Santo Domingo, Dominican Republic and has been invited to perform at numerous prestigious arts and music festivals, among them the Dominican Republic Jazz Festival.