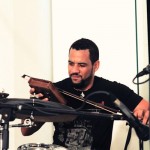 Edgar Molina of the Dominican Republic started percussion in 1998, as part of major music groups of his country such as the Ballet Folklorico APEC University, Marassa Group and Drum Major. His interest in typical, local music led him to explore the rhythms of Haiti on the neighboring nation of the island of Hispaniola. Edgar Molina continued his training as a percussionist and became part of the well-known group “Tadeo Marcoy Batucaribe¨ where his interest in Afro- Brazilian music received recognition.

In 2001 Edgar Molina entered the National Conservatory of Music and from then on, his career as a musician blosomed with different groups and recordings both nationally and internationally. He has collaborated with musicians such as Richard Bona, Nestor Torres, Danny Rivera, Chichi Peralta, Hector Acosta, Maridalia Hernandez, Pavel Núñez, Marel Alemani, Santo Domingo Jazz Big Band, Patricia Pereyra, Rafelito Mirabal & Tempered System, Sergio Vargas and Family André, among others. In 2012 he was invited by the arranger and musical director Sang Pengbian to be a part of Retro Jazz, highlighting their shared knowledge and versatility with rhythms.

In 2011, Molina became the music producer of the National Contemporary Dance Company of Dominican Republic, and continued his studies in music, experimenting in flamenco rhythms, and also became Music Director of the first company of flamenco music in his country. By February 2013 he created the first project of flamenco jazz in the country (Postales del Mundo), alongside the dancer Patricia Abreu.

In Edgar Molinas restless musical evolution, he began  mixing sound elements with drums, creating a fuzzed Jazz and electronic music project called ATRONIK ROOM,  in which he blends Afro -Brazilian music and flamenco rhythms colorfully infused with jazz, and takes it to another level by incorporating the retro sound of vinyl with a scratch technique.

This new progressive music project was created with the aim of raising awareness for the infinite possibility of music, especially jazz, and how music can incorporate jazz elements with other styles, such as funk, electronic music, and world music.