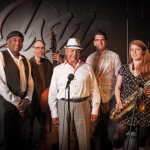 The Chairman of the Board

Colin Hunter is the founder, owner and Chairman of the Board at Sunwing Travel Group, a company that in 2014 celebrated 10 consecutive years on the PROFIT Magazine list of Canada’s Fastest-Growing Companies. The Sunwing Group includes Sunwing Airlines as well as wholesale tour operations Sunwing Vacations and Signature Vacations, making it one of the largest leisure travel companies in North America. With over 40 years of expertise in the travel industry, Colin and his son Stephen were jointly named Entrepreneurs of the Year in 2007 and 2009 in the Hospitality/Tourism category.

An accomplished ‘crooner’ in the style of Frank Sinatra, Nat ‘King’ Cole and Tony Bennett, with several released CD’s one of which made the “Top Jazz Albums in Canada” list, Colin has performed, and continues to perform, in various music venues across Canada, the US and internationally.  Then in April 2013, Colin was front and centre at the opening of the Jazz Bistro – a jazz club and restaurant that he opened in the heart of downtown Toronto which has quickly become a popular favourite for music lovers, both local and visiting.

Known for his smooth voice, relaxed style and classic, yet uniquely personal interpretations, Colin Hunter’s enjoyment of his art and his pleasure in performing onstage, translates readily to his enthusiastic audiences.

Colin Hunter’s fans come in all ages and all types and his music can be heard not just at the Jazz Bistro or on his CD’s. For those lucky enough to be flying on a fabulous vacation with Sunwing Airlines, just put on the headphones and tune in to hear The Chairman of the Board velvet tenor inviting you to “Come Fly With Me.”

For more than five decades Joe Sealy has enjoyed a successful career as a musician, actor, composer, music director and recording artist. Tours have also played a significant part in Joe’s career. Some of the more notable ones include: six months on the road with Blood, Sweat and Tears; a 19 concert tour of Africville Suite (including an appearance at the Canadian Embassy in Washington, D.C.); a 20 city national tour of Timothy Findlay’s Piano Man’s Daughter (along with Veronica Tennant and Sylvia Tyson); and a 2 week tour of Norway and Denmark including a performance at the world famous Jazz House in Copenhagen.

All of this work and success has not gone unnoted. Joe is both proud of, and humbled by, the acclaim he has received. Major awards include: a Juno Award for CD, Africville Suite; the Dora Mavor Moore Award for music direction in the Toronto production of Ain’t Misbehavin; and a Gemini Award nomination for his musical score for the documentary film The Road Taken.

Currently, Joe and his business and music partner Paul Novotny are the owners of Triplet Records Inc. Joe has also hosted his own radio show on Jazz FM 91 in Toronto for the past 8 years. In 2010, Joe was invested in The Order Of Canada.

Born to composer Milton and writer Lilly Barnes in Toronto Canada in 1965, he began his career singing and drumming with his older in The Micah Barnes Band for club, concert and TV appearances. His work in jazz, world and popular idioms is well documented having contributed to JUNO nominations or wins with Joe Sealy, Richard Underhill and The Flying Bulgar Klezmer Band.

He has toured internationally with Canada’s Holly Cole and Jane Bunnett but most extensively with African singing star Aster Aweke (“The Aretha Franklin of Ethiopia”). Both of Daniel’s self-produced jazz CDs “Culmination” (2003) and “Classic Beauties” (2007), are heard across Canada on the CBC and are favourites at JazzFM in Toronto. He was subsequently nominated for Drummer of the Year at The National Jazz Awards in both years. His quartet has performed at International Jazz Festivals (Toronto and Montreal) among others and was broadcast from an in studio performance on TV Ontario. He is currently developing a global jazz sound with The Daniel Barnes Groove Trio. www.danielbarnes.net

Paul Novotny makes Toronto Canada his home. He has performed with Cedar Walton, Geoff Keezer, Joanne Brakeen, Junior Mance, Kenny Wheeler, Holly Cole, Carol Welsman and other international artists. As a media composer for Film and Television he has written themes and underscore for CBC National News, CBC “The Hour” with George Stroumboulopoulos, CBC News Now, feature films and commercials. Paul has also performed in a duo setting with his music and business partner Joe Sealy since 1991. Together Joe and Paul have recorded five CDs on their own label, Triplet Records.

Paul also produced Joe’s Africville Suite recording which won a Juno award. Their other releases have also garnered several Juno award nominations. Novotny and Sealy have performed at the Montreal and Toronto Jazz Festivals, opening for Brad Meldau & Charlie Haden, Michel Petrucciani & Herb Ellis, and The Bobo Stenson Trio. Paul recently produced, arranged and played on Canadian singer Barbra Lica’s debut CD titled “That’s What I Do”. It reached number 1 on iTunes Canada within a week of its broadcast release and is now available in Japan on Universal records.

Alison is a rising star in the Toronto jazz scene. Hailing from Ottawa Ontario, she began performing with blues and R&B groups as a teenager, before moving to Toronto to attend the University of Toronto’s Jazz Performance program, where she studied with Canadian jazz luminaries, Mike Murley and Kirk MacDonald.

Since completing her studies, Alison has been busy performing, recording, touring across North America and Europe with numerous artists, including, Joe Sealy, Big Rude Jake, Tyler Yarema and his Rhythm, Shakura S’Aida, the Heillig Manoeuvre, and Alysha Brilla, as well as her own quartet. Peter Hum of the Ottawa Citizen writes “her melodic maturity rises above the music”, while the Whole Note Magazine writes “Alison Young takes musical chances, and has something to say”.