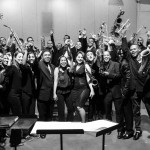 The twenty members of the band perform concerts in the style of Big Band, which became extremely popular during the “Swing Era”, from the beginning of the 1930s to the end of the 1940s, and prevails to this day. The Big Band Conservatory of National Music is composed of a brass section of five saxophones, four trombones and five trumpets, and complemented by a rhythm section that consists of drums, percussion, piano, bass and guitar. In their repertory there can be found traditional Jazz compositions, as well as current compositions of some of Dominican musicians, among which stands out the maestro Socrates Garcia.