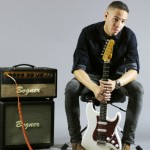 Benny Martínez is a Christian guitarist and producer who was born and was raised in Puerto Plata, Dominican Republic. He began playing the guitar when he was seventeen years old, and was self-taught for his first years playing.  Pursuing classical training, he studied at classic guitar at the “Institute of Culture and Art “ICA” in the Dominican Republic. His formal training helped him to develop his talent with the practical discipline and training required to excel as an artist.