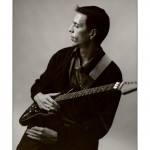 Alex is a modern jazz guitarist with a driving penchant for originality, daring and challenge. Born in France, he is renowned for his amazing ability to blend into any musical scenario. Alex has played in a number of eclectic bands such as the electro-rock ensemble Zend Avesta, the Brazilian group Vitto and the world music band Canaïma. He also played throughout Europe in major venues and festivals, and recorded a number of albums in ever-changing styles,

Alex is an ambitious player, composer, arranger and band leader that brought his skills to the United States to develop deeper into shaping his own style and sound. His most profound progress in this direction can be heard on his completely original new double CD concept album, “First and Last Light”.

Alex studied privately with Louis Soler for technical and melodic mastery and he attended CMCN in France. Then he flew over to Boston in America and spent a year at prestigious Berklee College of Music where he encountered many inspiring players. Alex next returned to France and immediately became a fixture on the Parisian jazz scene, playing in all kinds of unusual combos and as a leader in his own right.

“ I met Mario Monaco who played a small set of hand drums and percussion and we hit it off immediately”, Alex said, They played many gigs over a two year period and amassed a loyal following and finally recorded together in 2010 the CD  “‘Charms”.

Alex draws from all he has studied, experienced and finessed in a remarkably inviting and accessible style of playing that incorporates astounding technical facility with deep emotional connections.

Alex is deeply committed to the purity of making music “in the moment” as opposed to the more traditional way of composing music ahead of time. Alex’s concept of “spontaneous composition” results in a more high wire collaboration based on the emotion of the hour with maybe only shades of feelings or musical motifs that he has been exploring in the recent past.

“The term ‘fusion’ is too cold for me,” Alex muses. “Defining my music, the beats and the melodies are easy on the ears yet spiked with the sophistication of jazz improvisation in the solos and harmony.”