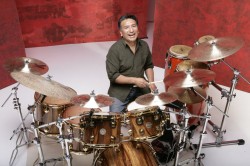 Alex Acuña was born and raised in Lima, Peru.  Self-taught musician, with a great musical gift of God, and by the inspiration of his father and brothers (all of them musicians) at the age of 4 he started playing the drums and the percussion and after a 10-year-old began to work with the Orchestra of his father and brothers “Tropical Boys of los Hermanos Neciosup” at the age of 16 became in Lima in one of the Peruvian musicians most requested as transferor for various programs of television, theatre, movies and disc recordings. Also participating as a musician in concerts, becoming a musician/artist of high level in his native country – Peru.

Alex traveled from Peru to the United States with a “Green Card” permanent residency visa.   Then in 1965 he went to San Juan Puerto Rico where he lived for a total of nine years and studied for 3 years at the National Conservatory in San Juan, Puerto Rico, managing to participate in many recordings and always playing jazz in the clubs of San Juan doing many TV shows in WAPA and achievement to participate with the Symphonic Orchestra of San Juan PR in the famous Don Pablo Casals Festival.

In the year 1974, Alex traveled to las Vegas and there 1998–2004 living for 5 years, making many musical privileges and by mncionar a how many stars of that times. The great Elvis Presley, Diana Ross, Frank Sinatra.  And while he lived in Las Vegas was hired to play with one of the jazz groups more famous and lgendario of all times;  Weather Report – recording “Black Market” as a percussionist and the famous winning disc of American Grammy and also platinum disc of jazz “Heavy Weather” in 1977 and in this last shared with Jaco Pastorious, Wayne Shorter and Joe Zawinul, participating in the group as drummer and percussionist.

Alex, went to live in Los Angeles, California in 1978 where he started another stage already as recording of disc recordings and television programmes, participating also in the recordings of the soundtracks of the music for the famous Hollywood films. Also earned many awards and honors for a term of 5 years in a row – Emeritus MVP Award from NARAS (National Academy of Recording for the Arts and Sciences) and also for 15 consecutive years won the title in Modern Drummer’s as the best drummer and prcusionista of the Latin/Brazilian genres.

Alex is widely recognized and respected as a great teacher, always sharing throughout all the land master classes and clinics as a drummer and percussionist, which already has recorded 5 educational videos that are distributed internationally.  In 2008 filmed a DVD called “The collector of rhythms” Alex travels to educating throughout the Earth constantly and often teaches master in different universities and conservatories of music USA, UCLA’s California, USC, CSUN, BERKLEE School of Music in Boston, Catholic University of Lima Peru. Alex is sponsored by different companies of drums, cymbals, percussiones and sticks etc.: www.dwdrums.com www.Sabian.com www.GonBopspercussion.com www.d’addario.com www.VicFirth.com

Patches of battery and percussiones of www.evans.com; microphones Shure, Line 6 and Planet Waves. Alex has also contributed to new designs of musical instruments in the areas of the percussion and including several lines of drumsticks, patches, sticks and sticks to www.VicFirth.com Kit;  the line of cymbals “Azuka” for the Zildjian, the line of the models of the company – www.GonBopspercussion.com, Alex Acuña Signature timpani, 4 Congas the Limited Edition Congas and Bongos, 5 campaigns and your own Cajon Peruano Special Edition – made in Peru, becoming the first drawer recorded on a CD much renembre with Chic Korea Y Paco De Lucia “Touch Stone” also the drawer’s best-selling in the world that includes the name of an artist, are available at www.Amazon.com; www.Professionalmusicians.com

The South American roots of Alex, its Caribbean roots, the knowledge and understanding of contemporary and classical music, it is classified as a complete musician. It is evident in the discs that he has recorded as a soloist for JVC: Alex Acuña and the Unknowns “Pensando en Ti”, No Accent, also Tonga Productions, Tolu “Rumberos Poetry” and “The VanGogh Bongo” and “Watercolors by drums” a CD where this sharing with the best drummers of this generation and its productions of several compact recorded in South America, the children of the Sun. These three CDs have been nominated for the Grammys, American and also in the Latin Grammy.  An of your most recent recording in 2013 with his trio – Acuna – Hoff – Mathise. “Barxeta”.

Alex style is characterized as innovative, energetic, a musician who when he plays, transmitted with a heart and for these reasons is acclaimed in the world whole and accepted, very dear, dear and appreciated by the musicos-colegas of these times.

Alex recognizes that his talent is a gift of God, and for the same reason, gives all glory, Honor, and glory to the Lord Jesus Christ.