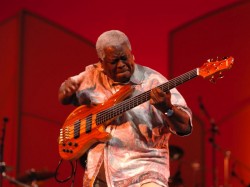 “The most widely used session bassist of our time” according to Guitar Player magazine. Born and raised in Mexico City to Honduran (Garifuna) parents, he received his earliest training from his father, a gifted composer and guitarist. A graduate of Berklee College of Music in Boston, Abraham has performed on over 4000 recordings and movie soundtracks. Abraham was a founding member of pioneering jazz groups Friendship with Ernie Watts, Lee Ritenour, and Alex Acuna and Koinonia with Justo Almario and Alex Acuna. He has recorded and performed with a remarkable array of jazz artists including Al Jarreau, Dianne Reeves, George Benson, Larry Carlton, Dave Grusin, Ella Fitzgerald, Herbie Hancock, Joe Lovano, Manhattan Transfer, Joe Sample, the Crusaders, Kirk Whalum, and Joe Williams.

Abraham has also contributed to many of the best loved Gospel and worship recordings of the past few decades. He recorded with Andrae Crouch, Take Six, Keith Green, Second Chapter of Acts, Phil Driscoll, the Imperials and Chuck Girard. He played on the debut (and subsequent) albums of the Winans, Bebe and Cece Winans, Donnie McClurkin, and Helen Baylor. He played on the pioneering worship series from Integrity Music including Ron Kenoly, Alvin Slaughter, Don Moen, and many others. He has collaborated with the Spanish pastor and worship leader, Marcos Vidal.

Berklee College of Music, awarded him an honorary Doctor of Music degree in September of 2005 in recognition of his achievements and contributions to a new generation of musicians. He is in demand as a teacher of music and worship in settings as diverse as visiting professor at Berklee College of Music and the University of Pittsburgh, and as a teacher and visiting worship leader at Saddleback and Willow Creek Community Churches and other churches throughout the United States and the world.