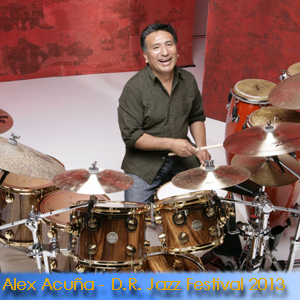 (born December 12, 1944) is a Peruvian drummer and percussionist, in the Afro-Cuban jazz style. Born in Pativilca, Peru, Acuña played in local bands from the age of ten, and moved to Lima as a teenager.[br][br]

At the age of eighteen he joined the band of Perez Prado, and in 1967 he moved to Puerto Rico. In 1974 Acuña moved to Las Vegas, working with artists such as Elvis Presley and Diana Ross, and the following year he joined the jazz-fusion group Weather Report, appearing on the albumsBlack Market and Heavy Weather. [br][br]

In the 1980s Acuña also recorded and toured with the Christian jazz band Koinonia, which featured session musicians Abraham Laboriel, Justo Almario, Hadley Hockensmith, Harlan Rogers, and Bill Maxwell. He played on Willy DeVille‘s Crow Jane Alley album and in 1987 he teamed up with Elvis Presley‘s TCB Band for the Roy Orbison TV special “A Black and White Night“. He played percussion on Blondie‘s number one hit “The Tide Is High“.He has also worked as an educator at University of California, Los Angeles and Berklee College of Music